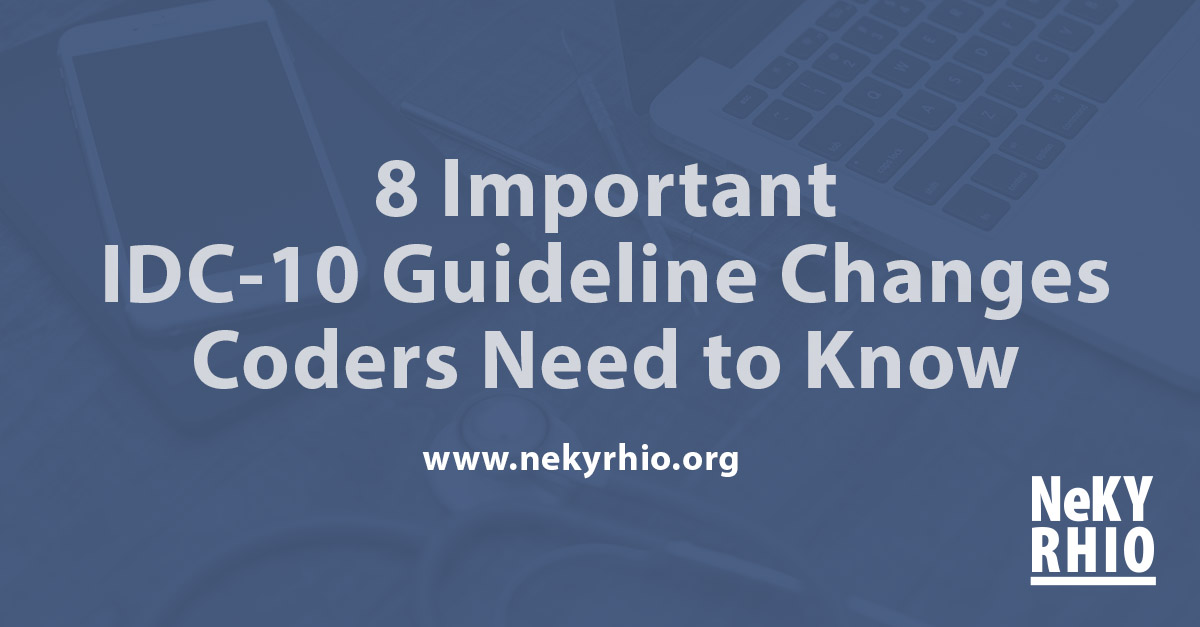 Now that ICD-10-CM has finally been implemented and everyone is using these new code sets, many questions may be coming up on what is the best code selection with so many to choose from. Many questions can be answered with a thorough review of the guidelines.

Now more than ever, coders need to be taking the time to review the guidelines and the instructional notes throughout the chapters. Seasoned coders who have been using ICD-9-CM for decades in particular need to take a step back and review the guidelines, as many of the rules, have changed for ICD-10-CM.

Below some of the most pertinent ICD-10-CM guideline changes that need to be reviewed:

1. ICD-10-CM includes not one, but two types of excludes notes:

Excludes No. 1: Indicates “not coded here” – that is, that two conditions cannot be reported together. For example, abnormal coagulation profile (ICD-10-CM code R79.1) cannot be coded with hemophilia C (ICD-10-CM code D68.1).

Injuries, poisonings, and external causes: The seventh character provides information about the episode of care as follows:

Initial encounter (“A”) is defined as the period when a patient is receiving active treatment for an injury, poisoning, or other consequences of an external cause.

Subsequent encounter (“D”) is used when the encounter occurs after the active phase of treatment when a patient is receiving routine care during a period of healing or recovery.

Sequela (“S”) is assigned for complications or conditions arising as a direct result of an injury.

If a code does not include six characters, use the placeholder “X” to fill the empty character(s) when a seventh-character value is required. For example, an unspecified fall, initial encounter requires three placeholders. Assign ICD-10-CM code W19.XXXA.

This is particularly true for injuries. If a patient has a bilateral condition, assign the bilateral code when one exists. Otherwise, assign separate codes for both the right and left sides.

Also, note the ICD-10-CM guideline regarding dominant versus non-dominant sides for codes G81 (hemiplegia and hemiparesis), G83.1 (monoplegia of lower limb), G83.2 (monoplegia of upper limb), and G83.3 (monoplegia, unspecified). When a provider documents the affected side but not whether it is dominant or non-dominant, coders should make the following assumptions:

For ambidextrous patients, the default is dominant.

If the left side is affected, the default is non-dominant.

If the right side is affected, the default is dominant.

In ICD-10-CM, a subsequent AMI is classified as one that occurs within four weeks of the initial MI. This differs from the eight-week timeframe in ICD-9-CM. A separate category in ICD-10-CM has been designated for this scenario (I22.).An I21 code must accompany an I22 code to identify the site of the initial AMI. The sequencing of the I22 and I21 depends on the circumstances of the admission.

Also new with ICD-10, category I21 may continue to be reported for transfers to not only other acute settings but post-acute settings as long as the patient requires continued care for the myocardial infarction.

Also, note that combination codes for adverse effects, poisonings, under-dosing, and toxic effects include the substance taken as well as the intent.

When the admission/encounter is for the management of anemia associated with a malignancy but the patient only receives treatment for the anemia, sequence the malignancy as the principal diagnosis followed by an appropriate code for the anemia. Note that this is the exact opposite of the ICD-9 guideline for this same scenario.

This guideline states that when a symptom is followed by a contrasting/comparative diagnosis, the symptom is sequenced first, followed by all of the contrasting/comparative diagnoses. Coders have relied on this guideline in scenarios in which a physician hasn’t determined the exact or definitive etiology of a symptom for which treatment is rendered.

However, in ICD-10-CM, coders can’t report the symptom as the principal diagnosis in these scenarios. Instead, they must be guided by the other selection of Principal Diagnosis Guidelines noted in Section II. Potentially, with the deletion of Guideline E, there may be some open interpretation by auditors, particularly when the documentation is subpar.

The previous guideline information was obtained from the following website: